Eggersmann – with foresight and dedication to success

Bad Oeynhausen. The Eggersmann Group is a collective of independent companies with 24 nationally and/or internationally active companies, and four overseas offices in Poland, the UK, France and Iraq. Along with activities from the construction, facility management and plant construction fields, the 4-star Lind Hotel in Rietberg and management of composting facilities are also included in the allrounder's service portfolio.
Founded in 1951 as a construction company with eight employees, the company has grown drastically to the present day in terms of employment figures. Thus, along with the above average growth rate of the company, the respective establishments and acquisitions of companies have resulted in an increase in employment figures. While in 1995 the companies Fechtelkord & Eggersmann and Kompotec had a total of 80 employees, the consortium Eggersmann already had 161 employees in 4 companies in 2004. In 2015, the number of employees in the group's now 24 companies increased by another 6.4%, from 528 to 562. Currently the area of plant construction is exhibiting great demand for additional workers due to the increasing number of projects.

The chief executives presented several promising references to illustrate the broad service spectrum of the Eggersmann Group. One example is the combination facility for treating biological waste in Han Bogrov. Two separate plant tracts prevent the material from mixing, thereby ensuring smooth operation. The approximate 24,000 t/a of green waste is used to produce compost, whereas biogas is produced from the majority of the 20,000 t/a of biological waste through anaerobic fermentation. Eggersmann Anlagenbau (EAB) functioned as a general enterprise in this project commissioned by the city of Sofia. After successful development and activation in 2014, the project was even ultimately distinguished as the "Building of the year - Bulgaria" that same year. "Behind projects of this scale are years of planning and implementation, which constantly require the highest level of concentration and utmost dedication. We are thus all the happier when this engagement is honoured with such an award," says Eggersmann. The EAB is also involved in the follow-up project - a domestic waste plant with throughput of 410,000 t/a. Conveyor technology, rotary sieves and conveyor belt separators are being provided by Eggersmann. Initial activation of the plant is planned for August 2015.


Furthermore, since the beginning of this year the assembly work for a new RDF facility in Tel Aviv has been ongoing. An integrated recycling facility with a capacity of 540,000 tons per year (nominal input) will be installed over an area of 21,000 m². The incoming material - consisting of municipal solid waste (MSW) as well as commercial and industrial waste - will be separated, recycled and used to produce alternative fuels (RDF). The entire production output of 160,000 tons of RDF will be supplied to the kilns of a nearby cement plant annually. The foreseen starting date for activation is as early as the end of this year.

Certainly one of the most important construction projects of the last year is the new facility for mechanical-biological waste treatment (MBA) in the Polish town of ?ary - drafted, erected and equipped in cooperation with various companies of the Eggersmann Group. The development of the property, including planning and production of the entire infrastructure, lay in the hands of Eggersmann Bauwesen. In addition the company constructed all structures located on the premises, such as the hangars, administrative buildings and annexes. The disposal site and the mechanical equipping of the machinery preparation are being provided by Eggersmann Anlagenbau (EAB). Conveyor, bunker and rotting technology, tunnel inflow and outflow systems, conveyor belts, trough and chain conveyors were used here. Furthermore, Anlagenbau's company BRT - Better Recycling Technology - supplied the machines for the mechanical waste treatment, such as a sack opener for plastic sacks.

Organically rich fractions are being provided for aerobic treatment by using an automatic input system in the form of conveyor belts from EAB for the biological treatment - approximately 28,000 tons of the total input quantity in ?ary per year. Among others, a converter from the company BACKHUS ensures rapid drying and secure hygienisation of the fractions - in short, an optimal rotting process.

After a two-year construction phase the facility was handed over to the project commissioner on time and ready for use, and has already been activated. "?ary is one of the large projects in which we use all of our synergies and were able to achieve a more than satisfactory result with our know-how in the most diverse of fields," reports Eggersmann.

In general, consistent expansion of the competency spectrum in plant construction has been seen in the full-liner Eggersmann over the past years: After the successful 2012 acquisition of the Edewecht-based company BACKHUS, a specialist in professional solutions for composting, soil remediation and waste processing, the Ibbenbüren-based company BRT Recycling Technologie GmbH was integrated into the company the following year. As a specialist in machinery construction in the field of sorting and recycling technology, with an export share of over 85 %, the company fits perfectly into the international alignment of Eggersmann Anlagenbau. In addition, since May 2015 the companies BRT and Hartner Maschinenbau, based out of Gundelfingen in Bavaria, have been working closely together. Thomas Hein clarifies: "The production portfolios of both companies are somewhat similar, but not identical, so that the cooperation constitutes successful expansion and allows us to use shared distribution channels in the future." back to news 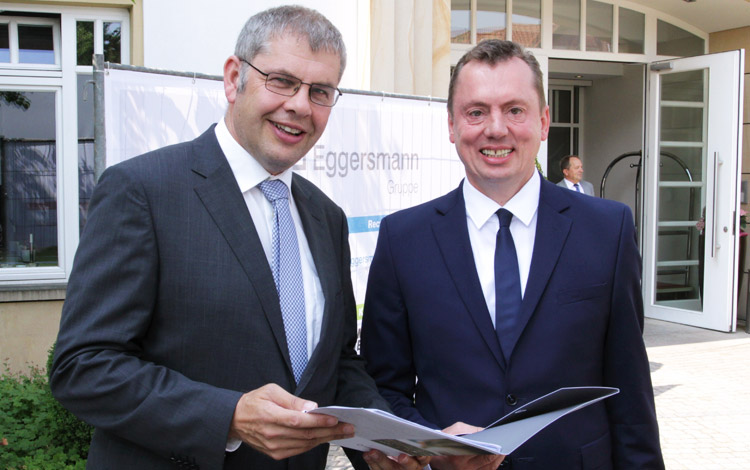 (l. to r.) Chief executives of the Eggersmann Group:Karlgünter Eggersmann and Thomas Hein

The combined plant for treating biological waste in Han Bogrov was deemed the "Building of the year – Bulgaria" in 2014.